Please make plans to join us on April 29, 2019 at a very special event! Open to all those who have Tourette, families impacted, and professionals who are interested in learning more about Tourette Syndrome and tic disorders, this will be an amazing day. Please check out the flier for more information and register on-line at: https://sites.wustl.edu/tics/tic-talk-2019/

We hope you’ll join us, the morning of April 5, to hear nationally recognized Tourette Syndrome expert Dr. Michael Himle, pictured above. He will share information on TS research and the newest behavioral therapies, including Comprehensive Behavioral Intervention for Tics (CBIT).

Like Loading...
The first scheduled event for the newly formed group of Missouri teenagers and young adults with Tourette Syndrome will be from 2:00 to 4:30 p.m., Saturday, Aug. 17, at the St. Louis Zoo. Attendees will meet at the north entrance.

If you’re interested in participating, visit this Facebook group and ask to join, or send an email to Jackie Schechter at jspershing93@gmail.com.

A group of Missouri teenagers and young adults with Tourette Syndrome are working to plan events in the St. Louis area, at which they can get together, share experiences, support each other, and generally, have some fun.

If you’re a Missouri teen or young adult with TS and would like to participate, visit this Facebook group and ask to join.

If you know a teen or young adult who might be interested, please pass along this information.

Finally, if you have questions, you can send an email to one of the group organizers, Jackie Schechter, at jspershing93@gmail.com.

The newest youth ambassador for the Greater Missouri Chapter of the Tourette Syndrome Association is Drew Guise, 14.

Drew was diagnosed with TS at eight years old, when he was in the third grade at Eureka Elementary in the Rockwood School District. During the first few years, his symptoms were relatively minor. Then, as adolescence progressed, those symptoms began to rapidly take control of his life. By the time he was in fifth grade, Drew needed major assistance during even the most common day-to-day activities. Over the next two years, With the help of doctors, counselors, and family, Drew was eventually able to manage most of his externally visible symptoms. In April 2011, he travelled to Washington D.C. to participate in youth ambassador training.

Since then, Drew has spoken to both students and adults in a variety of settings, from classrooms to large-group venues. His presentation is a blend of factual information and personal anecdotes about his journey with TS over the years. Drew can speak to a number of topics including bullying, acceptance, and awareness of those around you.

To schedule Drew for a speaking engagement, call 636-938-3858 or send an email to stlguises@yahoo.com. Drew is accompanied by a parent or adult guardian to all events.

Follow this link to listen to a recent St. Louis-area radio interview, featuring Drew and his father, Marty.

Like Loading...
Bring your entire family and join the Greater Missouri TSA chapter from Noon to 2 p.m. on Saturday, June 16, at the Family Golf and Learning Center, 3717 Tree Court Industrial Blvd., off Marshall Rd., in Valley Park, Mo.

The event will feature free miniature golf, free food (hot dog, chips, and soft drink), and a free bucket of golf balls for the driving range. You’ll also have an opportunity to speak with Craig Story, a professional golf instructor who has TS. (Note: We last visited the Center and Craig in May 2009.)

We look forward to seeing you.

You can now watch the entire program online.

The content is designed to inform teachers, medical professionals, social workers, and others about TS, including ways to recognize and help those who have it.

An accompanying slideshow (in PDF) is available to download and print.

This excellent resource is made available through the professional education outreach partnership joining the Tourette Syndrome Association (TSA) and the U.S. Centers for Disease Control & Prevention (CDC.)

You can also obtain a physical copy of the DVDs by completing this online form.

There is no charge for this resource. Preference is given to TSA members. Orders limited to one per person, while supplies last. 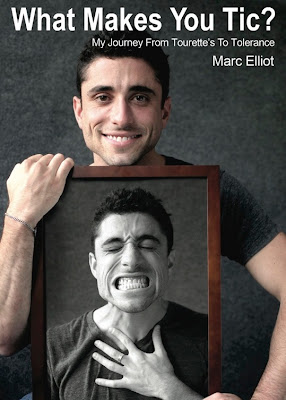 Marc has overcome a number of challenges. He was born with a rare digestive disease that left him with virtually no intestines. Then, at age nine, he developed Tourette’s Syndrome. Now twenty-six, Marc inspires audiences across the country with his life story, illustrating the importance of tolerance and appreciating others for their unique gifts. He is also the author of a brand new book, What Makes you Tic? (Marc will gladly sign copies. Bring your own or purchase one at the event for $15.)

This event is a great opportunity for TS kids, families, and educators to meet Marc and learn from his experience.

Light refreshments will be served.

Funds have been established by TSA Board Members to assist those who wish to attend the TSA 40th Anniversary National Conference to be held at the Hyatt Regency Crystal City in Arlington, Va., in April.

Scholarship awards will be (a) based on need, (b) determined by the Conference Scholarship Committee, and (c) cover conference registration fees only; travel and hotel expenses will remain the responsibility of the award recipients.

Applications should be submitted as early as possible and no later than Friday, January 27, 2012, via one of the following methods:

Awards will be announced by Friday, February 10, 2012.  All decisions of the Committee are final.

The Missouri Chapter of the Tourette Association of America(TAA) serves individuals and families in the St. Louis and Kansas City metropolitan areas and beyond. In concert with the national TAA, we provide information about Tourette Syndrome (TS) and the resources available to help affected families throughout our service area. Our chapter is an all-volunteer, 501c3 agency. We welcome the participation of anyone interested in Tourette Syndrome.